“Shake Off” THIS, Chancellor Klein and Mayor Bloomberg.

In fact, she defends it. She presents it as a teaching moment, as an example of how Arabic, and middle eastern culture will be taught in the Khalil Gibran International Academy. From today’s New York Post article:

“The word [intifada] basically means ‘shaking off.’ That is the root word if you look it up in Arabic,” she said.

“I understand it is developing a negative connotation due to the uprising in the Palestinian-Israeli areas. I don’t believe the intention is to have any of that kind of [violence] in New York City.

“I think it’s pretty much an opportunity for girls to express that they are part of New York City society . . . and shaking off oppression.”

Whose oppression are the girls shaking off, if they are using the word “Intifada”? Is KGIA also an opportunity for girls to shake off oppression in an Intifada? How can Almontaser not disavow the t-shirt, apologize for her involvement in the organization that created it, and quit her position as a principal in a New York City public school?

Thousands of noncombatants, Israelis and Palestinians, have been killed in the Intifada waged by Palestinian combatants against the people of Israel. It is a tragedy and an obscenity, not a trendy slogan of “shaking off” anything.
Today’s New York Post also shows the absolute denial of the New York Department of Education concerning the Khalil Gibran International Academy’s links to Islamist Extremism:

A Department of Education spokeswoman defended Almontaser, saying her link to the T-shirt was tenuous.

Tenuous? Her link to the group whose name is on the t-shirt – AWAAM, for Arab Women Active in Arts and Media – is as tenuous as that of Mayor Bloomberg to New York City. She is founder and director of the Yemeni American Association, sponsor of AWAAM.

AWAAM has removed the “c/o Yemeni American Association” text since we showed the connection. We will not speculate as to why they might have done this, but encourage the public to think about possible motivations. Here are the old (google-cached as of July 25, 2007) and new (as of today) versions of their “contact us” page: 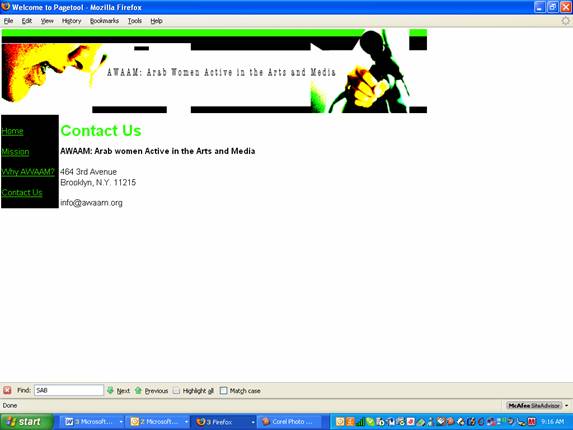 The change of the webpage text could have the appearance of a cover-up of the ties between AWAAM and the Yemeni-American Association.

Are Chancellor Klein and Mayor Bloomberg party to this apparent cover-up? How high up is the involvement in this apparent attempt to hide these Islamist ties between the “Intifada NYC” t-shirt and the KGIA public school principal Dhabah Almontaser?

According to the New York Post, the ADL issued a public statement with new concerns about Almontaser’s connections to a “militant pro-Palestinian group, al-Awda” :

“The T-shirt is a reflection of a movement that increasingly lauds violence against Israelis instead of rejecting it. That is disturbing,” said Oren Segal, a spokesman for the ADL.

It is time for the parents, teachers and citizens of New York City to demand that Chancellor Klein and Mayor Bloomberg stop the Khalil Gibran International Academy project immediately and find places in other schools for any children already enrolled.

Chancellor Klein and Mayor Bloomberg, end your involvement in the apparent cover-up today.

Posted in Madrassas Across U.S.. 10 Comments »

10 Responses to ““Shake Off” THIS, Chancellor Klein and Mayor Bloomberg.”